An Equal World is an Empowered World

RT Edgar is fortunate and proud to have remarkable women across our organisation. Women of influence, women who have all worked incredibly hard to achieve their success and women who are leaders in our workplace and in the industry.

Saturday March 8th is International Women’s Day (IWD) and this year’s call to action is “An equal world is an enabled world.” To celebrate IWD we thought we would take a moment to celebrate the achievements of some of RT Edgar’s outstanding women leaders. As business leaders in an historically male dominated industry, each has challenged existing stereotypes to create opportunities for themselves and for other women as future leaders in real estate.

Each has also personally achieved something unique in their profession. Sarah Case is a Director of RT Edgar Toorak. She is the only female director and business owner in the South Yarra/Toorak real estate market. Joanne Royston, Director RT Edgar Williamstown was one of only two female auctioneers in Victoria when she started out over a decade ago. Holly Longmuir, Managing Director RT Edgar Portsea, Flinders and Sorrento is a passionate advocate for equality in the work force and her team is evidence of her commitment; she heads up a team of twenty eight people over three locations and three quarters of her team are women. Vicki Sayers, Director RT Edgar Mount Eliza was the first woman ever to win REIV Sales Person of the Year in 2017. Vicki went on to win that award for three consecutive years and in 2019 she was named REIV Executive Sales Person of the Year.

Common to each of these inspiring women is their absolute passion for what they do and for their businesses and their commitment to creating workplaces where women and men are challenged, inspired and supported to achieve success and leadership positions. Their success has not come without challenges but for each woman, leadership has been the result of dedication, determination and “a thick skin”.

Across March we will be publishing a series of articles on our inspiring women leaders, reflecting on what equality means to them personally and how equality is being made meaningful at RT Edgar today. 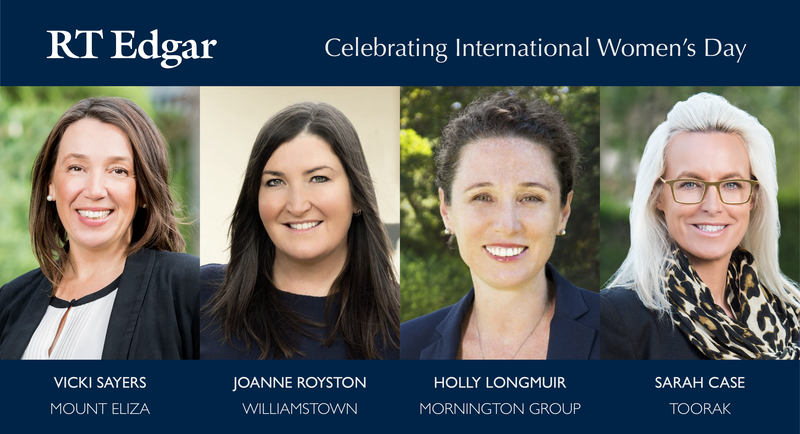